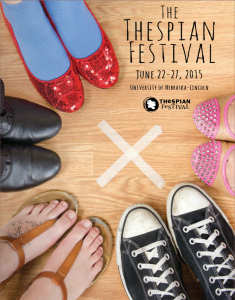 Every summer, thousands of high school Thespians bring their love of all things theatre to the Thespian Festival, a celebration of student achievement in the arts. Organized by the Educational Theatre Association and hosted by the University of Nebraska in Lincoln, the Festival is a one-of-a-kind, weeklong immersion experience in singing, dancing, acting, designing, directing, creating, writing, and memory-making. Festival features workshops presented by theatre professionals, individual and group performances, programs for technical theatre students, and opportunities to audition for college admission and scholarship. Whether you’re just beginning your theatrical journey, a seasoned senior with an impressive resume and great headshot, or an educator seeking enriching professional development—there are many opportunities to hit your mark at the Thespian Festival.

PF: It Shoulda Been You @ The Brooks Atkinson Theatre through August 9, 2015