Peter Filichia, James Marino, and Michael Portantiere talk with Mary Testa. Afterwards, we review The Elephant Man, Side Show’s closing, Something Rotten next at St. James, and what’s up with Laura Benanti. 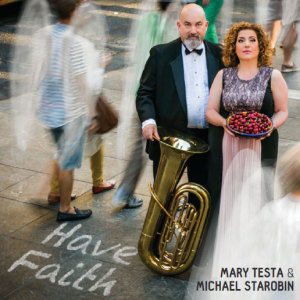 Ghostlight Records has announced the release of the new CD from MARY TESTA – the two time Tony Award nominated singer and actress currently starring in Wicked on Broadway – and MICHAEL STAROBIN, the Tony Award winning orchestrator and arranger. The album will be available in stores and via online outlets December 2, 2014. Mary and Michael will perform a special CD release engagement at The Laurie Beechman Theater at The West Bank Café January 4-5,11-12, 2015 at 7:00 PM. For tickets, please visit www.lauriebeechmantheatre.com. To hear an exclusive stream of the song “Pink” and to pre-order the album, please visit www.sh-k-boom.com/havefaith.

Side Show closing, Something Rotten next at St. James?

PF: In Fields Where They Lay @ The New Ohio Theater

Peter — Into The Woods Movie

The Nutcracker and I

2. What If (Michael John LaChiusa)