This Week on Broadway for September 7, 2014: 10 Reasons Why We Love Ben Rimalower 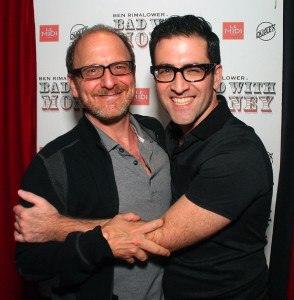 Ben Rimalower and Lonny Price at the opening night performance of BAD WITH MONEY at the Duplex. (Photo by Michael Portantiere)

BEN RIMALOWER IS “BAD WITH MONEY”

A NEW PLAY WRITTEN AND PERFORMED BY BEN RIMALOWER

DEBUTS AT THE DUPLEX

Ben Rimalower’s addiction to spending beyond his means has driven him to extreme lengths all his life. In BAD WITH MONEY he charts his sometimes hilarious, sometimes harrowing struggle to overcome his problem—or get rich trying. Written and performed by Ben Rimalower and directed by Aaron Mark, BAD WITH MONEY premieres at The Duplex (61 Christopher Street at Seventh Avenue) from September 4 through November 6.

BAD WITH MONEY will be performed at The Duplex (61 Christopher Street at Seventh Ave, New York, NY 10014) on Thursdays at 9:30 PM from September 4 to November 6. Tickets are $25 (with $50 VIP tickets available) and are on sale at PurplePass.com or (800) 316-8559. There is a two-drink minimum per person. You must be at least 21 years old to attend. Please visit BAD WITH MONEY at www.BadWithMoney.net and www.facebook.com/BadWithMoney.

All of The Bridges of Madison County Musical sheet music is now available for digital download! Get out your credit card and call your voice teachers, the party is getting started!

The producer of “King Kong,” meanwhile, has been circling the Broadway for months but is not ready to bring the musical to New York because of extensive creative changes underway since the show’s world premiere production last year in Australia, the three executives said.