Spotlight: Heidi Schreck, What the Constitution Means to Me 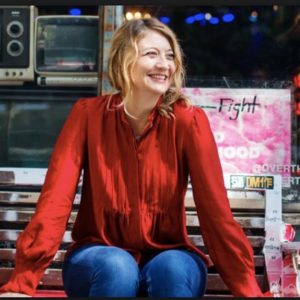 Guest: Heidi Schreck
Heidi is a writer and performer living in Brooklyn. Her other plays include Grand Concourse, which debuted at Playwrights Horizons, Steppenwolf and theaters all over the country in 2014-15 and was a finalist for the Susan Smith Blackburn Prize and a Lily Award. Other plays, including Creature, There Are No More Big Secrets and The Consultant, have been produced by Berkeley Rep, Long Wharf, Page73, Seattle Public Theatre, New Georges, Rattlestick, and more. Heidi has commissions from the Atlantic Theatre Company, Manhattan Theatre Club, and South Coast Repertory Theatre and has been a writing fellow with the Clare Tow Foundation, Soho Rep and the Sundance Theatre Lab. Heidi’s television writing includes “I Love Dick,” “Billions” and “Nurse Jackie,” and she is developing a TV series with Amazon based on Patricia Lockwood’s Priestdaddy. As an actor, Heidi has performed at Berkeley Rep, Roundabout Theatre, MTC, Playwrights Horizons, Shakespeare in the Park, Clubbed Thumb and Two-Headed Calf and on TV in “Nurse Jackie,” “Billions,” “Law &amp; Order: SVU” and “The Good Wife.” She is the recipient of two Obie Awards, a Drama Desk, and the Theatre World Award.

Host: Jena Tesse Fox | Twitter
Jena Tesse Fox has been writing about theater for more than 10 years for numerous publications, including Playbill Magazine, BroadwayWorld.com, Time Out New York and HowlRound.com. She is a voting member of the Drama Desk Awards, and is a contributor to BroadwayRadio

One Response to “Spotlight: Heidi Schreck, What the Constitution Means to Me”