Peter Filichia, James Marino, and Michael Portantiere talk with Sam Davis about the release of Red Eye of Love (Studio Cast Recording). In the reviews we discuss What Did You Expect, The Wild Party, Missed Connections, West Side Story with New York Philharmonic, Tony Bennett Celebrates 90, and Where Did We Sit on the Bus. In TV and film, Matt talks about the upcoming Emmys, Theatre People on TV, and Live Screenings. In the news, we talk about the passing of Edward Albee. 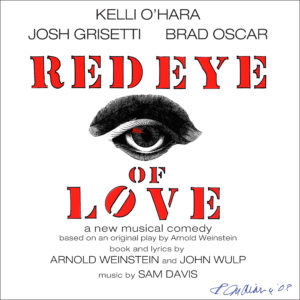 SAM DAVIS is a composer, arranger, conductor, and pianist. Winner of the Jonathan Larson Award for composition. His work as composer is featured on the PS Classics release Love on a Summer Afternoon: The Songs of Sam Davis, and his new musical Red Eye of Love opened September 4, 2014, at Off-Broadway’s Di-Capo Theater. He is the musical director/arranger/conductor for the Broadway revival of Side Show, and his other Broadway credits as arranger and/or conductor include An American in Paris, Big Fish, Scandalous, and Curtains. He was music supervisor for Dreamgirls in Korea, Japan, South Africa, at the Apollo Theater, and on national tour. He has been arranger, orchestrator for many shows regionally, including mostly recently Holiday Inn (Goodspeed) and Little Dancer (Kennedy Center). Sam is a graduate of the University of Michigan.

PF: THE GABRIELS: Election Year in the Life of One Family Play Two: WHAT DID YOU EXPECT?
September 10 – October 9 @ The Public Theater

Edward Albee, Trenchant Playwright for a Desperate Era, Dies at 88 by Bruce Weber

17 Three Is The Key Finale