This Week on Broadway for September 11, 2016: Ahna O’Reilly of The Robber Bridegroom

Peter Filichia, James Marino, and Michael Portantiere talk with Ahna O’Reilly of The Robber Bridegroom. Reviews include Edwin @ St Clements, Bears in Space @ 59e59, Bliss @ The Flea and Jana Robbins @ 54 Below. We discuss the Spamilton opening, Gerry McIntyre (choreographer), Ken Fallin (caricatures), Barbra Streisand’s performance of Send in The Clowns and her election as Chairwoman of the Ronald O. Perelman Performing Arts Center at the World Trade Center.

Felt it was important to wear my Mississippi uniform and stand with our poster for my phone interview with “This Week On Broadway” promoting our cast album release, right? @shkboom @stevepasquale #Robberbridegroom #Mississippi 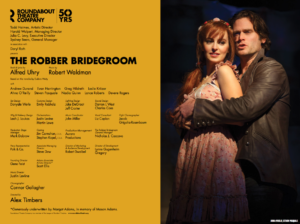 The Making of The Robber Bridegroom 2016 Cast Recording

Listen: This Week on Broadway for March 20, 2016: She Loves Me, Disaster!, The Robber Bridegroom

Barbra Streisand’s performance of Send in The Clowns, from Friday’s LGBT fundraiser for Hillary Clinton at Cipriani Wall Street.

VERSE 1
Is he that rich?
Maybe he’s poor?
‘Til he reveals his returns
Who can be sure?
Who needs this clown?

VERSE 2
Something’s amiss
I don’t approve
If he were running the free world
Where would we move?
Name me a town?
Just who is this clown?

BRIDGE 2
Hillary’s kind
Smart, that is clear
While she is giving us hope… Trump is selling us fear
Look how he changes his views every time that he speaks
It’s lie after lie
Can’t take eight more weeks!

VERSE 4
This is no farce
Maybe he’s broke?
Is this “The Art of the Deal”
Or some awful joke?
You’ve got to admit
This silly half-wit
Is so full of shit!

Arts Center at Ground Zero Has a New Design, and Barbra Streisand in Charge by Michael Cooper