This Week on Broadway for May 15, 2016: Jennifer Simard and Kurt Peterson 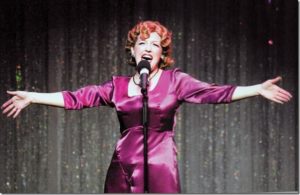 When Everything Was Possible – A Concert (with comments) (Sh-K-Boom)

Follow Spot: Kurt Peterson and Victoria Mallory Remember When Everything Was Possible by Michael Portantiere

GHOSTLIGHT RECORDS
PRESENTS
“WHEN EVERYTHING WAS POSSIBLE”

New York, NY (5/2/2016) – Ghostlight Records will release the concert recording of When Everything Was Possible, an exciting and poignant evening celebrating Broadway’s Golden Age starring Kurt Peterson and Victoria Mallory, on May 13. The beloved performers – who appeared in the original productions of the classic musicals Follies, A Little Night Music, Dear World and Sondheim: A Musical Tribute, among many others – reunited at New York’s City Center in 2012 and this live album memorializes that special evening, Victoria’s last New York stage appearance. When Everything Was Possible includes songs from shows they appeared in either separately or together between 1966 and 1974, in addition to two new compositions. To pre-order the album, please visit www.sh-k-boom.com/when-everything-was-possible.

When Everything Was Possible features selections from landmark works of musical theater, along with hilarious and personal memories from the stars themselves, to offer a walk down Broadway’s memory lane. The concert has new orchestrations by Jonathan Tunick, music direction by Michael Rafter, direction by Larry Moss, musical staging by Joshua Bergasse, historical projections by TelegraphicMedia, original songs by Kurt and composer Jesse Wiener, and an introduction by Ted Chapin, President of the Rodgers & Hammerstein Organization. The album is produced by James William Productions and Stephenie Skyllas.

The accompanying 32-page booklet contains many never-before-seen historic photographs, as well as images from the 2012 concert, a memorial to Victoria, and a note from Victoria’s husband, Mark. The archival recording beautifully captures the hopeful, emotional, and exuberant evening that Backstage said, “No young performer should miss. Not only will you learn a lot; it will give you hope.”

After seeing When Everything Was Possible, Broadway legend Hal Prince – who directed many of the iconic original productions – called the show “magical” and remarked, “they represent the best of musical theatre. Beautiful voices, charm, shining intelligence, and additionally they’re terrific looking. The show they’ve so adroitly put together is thoroughly entertaining, informative, poignant, was performed with grace and generosity and is a real treat.” Tony Award winning Broadway star Kelli O’Hara raved “I was so moved and inspired. I felt like I was seeing something so rare and special. Everyone did.”

For more information, please visit www.WhenEverythingWasPossible.com.
——————————-
KURT PETERSON began his Broadway career when Leonard Bernstein and Richard Rodgers chose him to play Tony in the revival of West Side Story at Lincoln Center. He then starred opposite Angela Lansbury in Dear World and created the role of Young Ben in Stephen Sondheim’s Follies. Off-Broadway, Kurt starred in Dames at Sea, By Bernstein, and Alias Jimmy Valentine, and appeared in the Town Hall productions of Knickerbocker Holiday, Music in the Air and I Married an Angel. Kurt sang “Proud Lady” to Patti LuPone when he starred opposite her in the Broadway-bound The Baker’s Wife. He also starred in the highly acclaimed Canadian premiere of Company and Rob Marshall’s production of Side By Side By Sondheim. Kurt was featured in the 75th birthday celebrations “Wall to Wall Sondheim” and “Children & Art” honoring Stephen Sondheim and has performed as a leading man in many productions and concerts around the country and in Europe.

Kurt and his company, James William Productions (JWP), produced the acclaimed Sondheim: A Musical Tribute, the first celebration of the composer/lyricist; helped launch the New York and London productions of Angela Lansbury’s Gypsy; produced the live tours of WPIX-TV’s classic children’s show “The Magic Garden”; and the National Tour of Rob Marshall’s innovative Side By Side By Sondheim. Recent projects include co-producing the New York productions and National Tour of the Stephen Schwartz family musical Captain Louie; the Off-Broadway production of the play Capture Now, directed by Larry Moss; and the BC/EFA benefit Alone At Last, featuring the music of Ian Herman. JWP is currently represented by the Helen Hayes and Drama Desk Award winning play, Zero Hour, about theatre legend Zero Mostel, now touring the US and Canada, and two new musicals: Proud Ladies (2016) and Dancing on the Moon (due 2017). Kurt is the owner of New York City’s The Voice Studio, home to many of Broadway’s greatest teachers and performers. www.jameswilliamproductions.com

VICTORIA MALLORY made her Broadway debut as Maria in the 1968 Lincoln Center revival of West Side Story, alongside Kurt Peterson as Tony. Victoria went on to play Lili in a New York City Center revival of Carnival before originating the role of Young Heidi in Stephen Sondheim’s Follies. She originated a second role in a Sondheim musical when she won the role of Anne Egerman in A Little Night Music. For six years, Victoria played Leslie Brooks on the soap opera “The Young and the Restless,” and Dr. Denise Foxworthy on NBC’s “Santa Barbara.” In 1977 Victoria received an Emmy Award nomination for the television special “After Hours: Singin’, Swingin’, and All That Jazz.” Victoria married Mark Lambert, her husband of 40 years and the Henrik to her Anne in A Little Night Music, and the couple’s daughter Ramona Mallory Lambert played the role her mother originated in the Broadway revival 36 years later. She taught at NYC’s The Voice Studio and served as a vocal and audition coach. On August 30, 2014, Victoria succumbed to a short battle with pancreatic cancer at the age of 65.

MP: The Curious Incident of the Dog in the Night-Time @ Ethel Barrymore Theatre