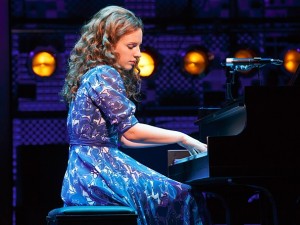 Jessie Mueller, winner of the 2014 Tony Award and Drama Desk Award for Best Actress in a Musical, and the 2015 Grammy for Principal Vocalist / Best Musical Theater Album, recently starred on Broadway as Carole King in Beautiful: The Carole King Musical. Prior to creating this award winning role, she starred on Broadway opposite Matthew Broderick as Billie Bendix in Nice Work If You Can Get It. Earlier, she was seen as Miss Janet Conover / Helena Landless in the Roundabout Theatre’s production of The Mystery of Edwin Drood (Drama Desk nomination) and as Carrie Pipperidge in Carousel at the New York Philharmonic. She made her Broadway debut opposite Harry Connick, Jr. in On a Clear Day You Can See Forever, receiving Tony and Drama Desk nominations. Regional credits include Into the Woods as Cinderella at the Delacorte Theatre in Central Park, Animal Crackers (Goodman Theatre, Chicago), She Loves Me (Writer’s Theatre), Guys and Dolls, Fiddler on the Roof (Marriott Lincolnshire), Meet Me in St. Louis (Drury Lane Oakbrook), and Henry IV Parts I & II at Chicago Shakespeare Theatre and the Royal Shakespeare Theatre in London.

Peter Gallagher out of On The Twentieth Century this week, post recording

The Rent Is Too Damn High: Toys R Us Is Leaving Enormous Times Square Location

Broadway Has Your Ear! 8 Theatre Podcasts You Should Be Listening To by Robbie Rozelle