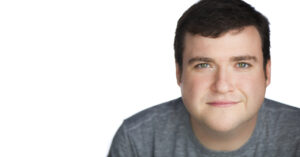 On this episode of BroadwayRadio’s “Spotlight,” Jena Tesse Fox talks to Todd Buonopane.

He has starred in four Broadway shows: …Spelling Bee, Grease, Chicago and Cinderella. On television, he was featured as one of 30 Rock’s most memorable recurring characters: Jeffrey Weinerslav.

Todd grew up in Andover, Massachusetts. (He is proud to the only one in his family without a Boston accent.)

He received his BFA from The University Of Michigan’s Musical Theatre Department. He also spent seven summers of his youth at Stagedoor Manor.

As a cabaret artist, Todd has performed in all the great cabaret spaces of New York City and Los Angeles. He has performed his one-man-show, Lying In The Driveway & Other Stories in NYC and Virginia.

In recent years, Todd had discovered his love and talent for teaching. He has taught masterclasses and workshops all over the country, and teaches regularly at The University of Michigan and The New York Film Academy.

Host: Jena Tesse Fox | Twitter | Instagram
Jena Tesse Fox has been writing about theater for more than 10 years for numerous publications, including Playbill Magazine, BroadwayWorld.com, Time Out New York and HowlRound.com. She is a voting member of the Drama Desk Awards, and is a contributor to BroadwayRadio