James Marino speaks with Michael Longoria about his new album, “Like They Do In The Movies”, which was released by BROADWAY RECORDS. 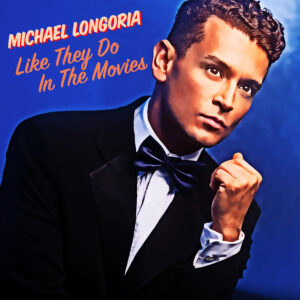 Following the release of his critically acclaimed Christmas album, Merry Christmas Darling, Michael Longoria takes us to the cinema with a collection of his favorite songs from the silver screen. Like They Do In The Movies is a romantic album that will take you back to a time when lovers lingered through the movie credits to steal a kiss in the glow of the big screen. Longoria’s cinematic love-note includes classics like “Evergreen” from A Star Is Born, “I Will Always Love You” from The Bodyguard, “Take My Breath Away” from Top Gun and “Unchained Melody” from Ghost. The album also features the debut of an original song written by Michael Longoria and arranged by James Dobinson called “Kiss Me (Like They Do In The Movies)”. Like They Do In The Movies features music arrangements by Rona Siddiqui and James Dobinson; and is produced by Grammy nominee Michael Croiter.