This Week on Broadway has been coming to you every week since 2009. It is the longest running Broadway and theatrical podcast with hundreds of shows giving thousands of reviews and interviews.

Peter Filichia | peter@broadwayradio.com | Facebook
PETER FILICHIA is a playwright, journalist, and historian with a number of books. His columns appear at MTI, Masterworks Broadway, Broadway Select and many other places.

Michael Portantiere | michael@broadwayradio.com | Facebook
MICHAEL PORTANTIERE is a theater reviewer and essayist. He is also a theatrical photographer whose photos have appeared in The New York Times and other major publications. You can see his photography work at FollowSpotPhoto.com. 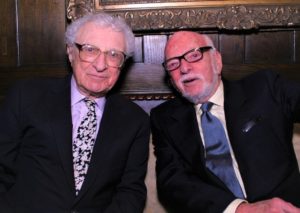 Sheldon Harnick and Hal Prince at an Encompass New Opera Theater tribute to Sheldon that was held at the National Arts Club in 2013. Photo by Michael Portantiere

Hal Prince, Giant of Broadway and Reaper of Tonys, Dies at 91 by Bruce Weber (The New York Times)

Opinion: The Prince Of Broadway’s Legacy Lives On Through His Music by Scott Simon (National Public Radio)

Will the Shubert Organization change the name of the Majestic Theatre to The Prince Theatre?

How Can ‘Moulin Rouge! The Musical’ Upstage the Movie? With 70 Songs by Sopan Deb (The New York Times)
Finding spots for the pop songs, credited to 161 writers, and getting the rights, was no cancan.

Email addresses: see above in bios

…and anywhere that you can listen to finer podcasts.