James Marino and talks with Philip Chaffin about his new album, “Will He Like Me” on the PS Classics label. 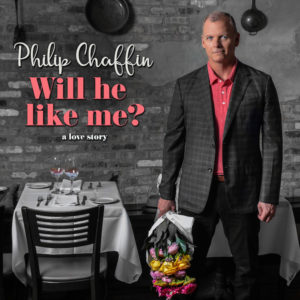 Bio: PHILIP CHAFFIN has received three Grammy Award nominations, for co-producing the Broadway cast recordings of Sondheim on Sondheim, Follies and Fun Home. Born and raised in Baton Rouge, Chaffin moved to New York in 1997, and within two weeks was cast in his first Encores! production (the revival of Sweet Adeline, in which he sang the solo “Pretty Jenny Lee”) and his first Broadway musical, Alan Menken and Tim Rice’s King David. He released his debut solo disc, the big-band album Where Do I Go From You? in 2000. All Music Guide greeted the new artist as “a singer with a highly engaging voice who clearly loves what he is doing. His mellifluous-toned tenor fits this music like a formfitting suede glove, and he does so seemingly without any effort at all, like honey running off the tongue.”

His second album, Warm Spring Night, which celebrated a century of Broadway love songs, was released in 2005; When the Wind Blows South, which brought the sounds of the South to the music Chaffin loves best, followed in 2008. His fourth solo disc, Somethin’ Real Special (The Songs of Dorothy Fields) was released in 2013. It graced several “Year’s Best” lists and was featured in The Huffington Post and USA Today; Show Business cheered, “Chaffin’s gorgeous, soaring baritone will make you hear these old songs in a fresh and thrilling new way.” He currently divides his time between performing in and around New York and running PS Classics, for which he serves as A&R Director.

The album is produced by Philip’s husband Tommy Krasker, a 12-time Grammy Award nominee for cast albums ranging from Follies to Fun Home. Philip and Tommy recently celebrated their 25th anniversary together.

1. Will He Like Me? (Jerry Bock & Sheldon Harnick)
Featured at the top of the interview

3. Cooking Breakfast for the One I Love (Billy Rose & Henry Tobias)

4. I Didn’t Know What Time It Was (Richard Rodgers & Lorenz Hart)

5. Man With a Load of Mischief (John Clifton & Ben Tarver)

11. But I Could Cook (Harold Arlen & Dorothy Fields)

12. I Got Lost in His Arms / Don’t Ever Leave Me (Irving Berlin) (Jerome Kern & Oscar Hammerstein II)

14. Windflowers (Jerome Moross & John Latouche)
Featured at the end of the interview

One Response to “BroadwayRadio Special: Interview with Philip Chaffin”