Listen to the episode here: 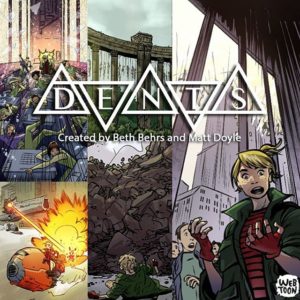 We’ve always known that Matt Doyle was one of the most talented performers in on the musical theatre stage, but with the spring 2016 release of “Dents,” a web-based comic book which he created with his life-long best friend Beth Behrs (Two Broke Girls, A Funny Thing Happened on the Way to the Gynecologic Oncology Unit…), the public was exposed to a new, more nerdy, side of the actor.

The engrossing comic explores such topics as the impact of climate change, fear of those different than yourself, coming to terms with who you are as a person, fighting for what you believe in and much, much more.

Doyle has starred opposite Broadway legends including Bill Irwin and Betty Buckley. He has lead shows crafted by some of the finest directors and writers in theater such as Marianne Elliott, Michael Mayer, Kathleen Marshall, Casey Nicholaw, Michael Wilson, Sheryl Crow, Berry Levinson, Matt Stone, and Trey Parker.

Matt has also worked in film and TV, starring in the cult hit, Private Romeo, and as Jonathan in the CW’s Gossip Girl.

Doyle most recently starred as Trey in the off-Broadway smash, Brooklynite. Brooklynite was directed by Tony award-winning, Michael Mayer. Matt continues to develop the role of Trey as the show prepares for it’s Broadway run.

Dents is an apocalyptic journey to the year 2111, where more than half of the world’s population has been wiped out by an ancient plague. After a vaccination is developed, there is a massive increase in the birth of identical twins possessing extraordinary powers, known in society as “Dents.” Following an incident at school, Eleanor learns that she herself is a Dent, separated from her twin at birth, and is quickly swept into an underground society of other Dents trying to survive. Dents will be back with a brand new season!