Listen to the episode here:

Nearly a year after their first conversation, acclaimed actress Alexandra Silber and BroadwayWorld and BroadwayRadio’s Matt Tamanini talk about her new book “After Anatevka,” which follows the journey of Tevye’s second oldest daughter Hodel as she travels far from the home she loves in search of her imprisoned fiancé, Perchik.

During the conversation, Al explains how writing the book brought her to a better understanding of herself, why the “Matchmaker” scene in “Fiddler on the Roof’s” most recent Broadway revival was so different from those that came before it, and how the death of her father impacted the story in “After Anatevka.”

“After Anatevka” is available now on Amazon and at booksellers nationwide. 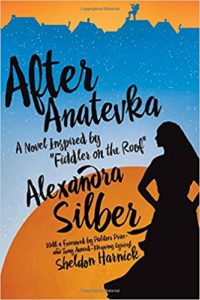 ALEXANDRA SILBER is an internationally acclaimed actress and singer who starred most recently as Tzeitel in the Broadway revival of Fiddler on the Roof. She earlier played Hodel in the same show in London’s West End. Those two roles inspired her to write After Anatevka.

She received a Grammy nomination for her acclaimed portrayal of Maria in the recording of West Side Story with the San Francisco Symphony.

She has appeared on all three incarnations of “Law & Order” and has performed in a variety of concert outlets including the 57th Grammy Awards, Royal Albert Hall, and Carnegie Hall.

This is her first novel.

July 5, 2017 | BRYANT PARK LITERARY FESTIVAL
Join me, and a wide range of celebrity authors for a lunchtime discussion of the summer’s hottest new books. Get the inside scoop on the author’s work, then stick around after and get your book signed. Books available for purchase on site

September 19, 2017 | 92ND STREET Y
A different kind of conversation at 92Y. ​In this daytime talk, we will be focusing on the “process” of writing After Anatevka— the research into the time period, how my work on stage informed the writing, and a detailed background of the construction of the character of Hodel from stage to page, and how she evolves in the novel.​ There will be a book signing following the event.

One Response to “Tell Me More | Episode 1: Alexandra Silber Talks After Anatevka”