Listen: TGIF! Hugh Jackman Back to Broadway? Daniel Radcliffe Back to London! “American Idiot” Film on TV! Lin-Man on SNL!

“Today on Broadway” is a daily, Monday through Friday, podcast hitting the top theatre headlines of the day.

2) Daniel Radcliffe to Return to the London Stage

“An American in Paris” to Close this Weekend 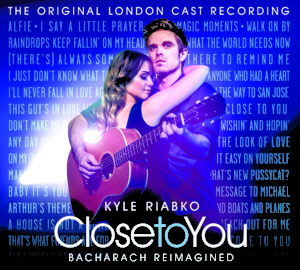 KYLE RIABKO – star and creator of the hit West End show Close to You: Bacharach Reimagined and the earlier acclaimed Off-Broadway version What’s it All About? Bacharach Reimagined – will bring his extraordinary Burt Bacharach arrangements to JOE’S PUB at THE PUBLIC for a solo concert and album launch on Monday, October 17 at 7:00 PM and Tuesday, October 18 at 9:30 PM. Close to You’s Original London Cast Recording is now available on Ghostlight Records. Accompanying himself on guitar, Riabko will perform his celebrated versions of such classics as “Alfie,” “I Say A Little Prayer,” “Walk On By,” “Raindrops Keep Fallin’ On My Head,” and many more. Details and tickets are at JoesPub.com.
Close to You: Bacharach Reimagined revitalizes the catalog of the iconic American composer for a new generation with Riabko’s visionary interpretations on the genre-spanning catalogue of Burt Bacharach, with lyrics by Hal David and others. The show was hailed as “one of the year’s 10 best” by The New York Times and Burt Bacharach himself said “Kyle has done something truly unique. It’s brilliant. It’s a very fresh take on my music and it’s a huge tribute to me.” The album also features special bonus tracks of Kyle’s never-before-heard original demos, which formed the basis for the project. The 28-page booklet includes a note from Riabko, liner notes, production and studio photography and opening night photos of Bacharach with the cast. Close to You: Bacharach Reimagined is produced and arranged by Kyle Riabko with David Lane Seltzer of Entertainment 360 serving as executive producer. To order, please visit www.sh-k-boom.com/close-to-you-bacharach-reimagined.

The recording features over 30 hits as performed by Riabko and the other incredibly talented young singers and musicians who made up the cast of this magical show. The album showcases beautifully-reimagined versions of classics such as “Alfie,” “I Say a Little Prayer,” “Walk On By,” “Raindrops Keep Fallin’ On My Head,” “The Look of Love,” “What’s New Pussycat?”, “I’ll Never Fall in Love Again,” “Don’t Make Me Over,” “(There’s) Always Something There to Remind Me,” “A House Is Not A Home,” and the enduring title track.

Close to You: Bacharach Reimagined was hailed as “an exhilaratingly fresh new spin” by the London Independent, “highly imaginative” by The Daily Telegraph, “the hippest and hottest musical night in town” by The Stage and “ferociously clever” by The Daily Mail. When the show originally opened in New York, Entertainment Weekly raved that “Riabko is the wonderfully appealing star. It’s completely swoon-worthy and super-groovy.” New York Magazine called the show “a stunning new musical. It’s a revelation and it’s fantastic.” According to The Washington Post, “the fun, youthful vibe of this show brings a new flavor to Bacharach’s timeless classics.”

Burt Bacharach appeared at the show’s opening night in the West End, and said, “This is star musicianship. Kyle is a beautiful singer and one hell of a guitar player. This is truly a gift. It’s a love letter to me.”

KYLE RIABKO is a singer, guitarist, composer and actor who grew up in Saskatoon, Saskatchewan. Before starring on Broadway in both Spring Awakening and Hair, Kyle released a full-length album of original music on Columbia/Aware Records and spent his teen years appearing as an opening act for a wide range of artists including: B.B. King, James Brown, John Mayer, Keb’ Mo’, Buddy Guy, Jason Mraz and Maroon 5, among others.