James Marino, Michael Portantiere and Carey Purcell talk with Raul Esparza. Reviews include City Center’s Wild Party, Shows for Days, Ruthless, Penn & Teller On Broadway, and a brief discussion about Jan Maxwell and the future of women on Broadway.

Carey Purcell | [email protected] | Twitter | Website
Carey Purcell is a staff writer and the features editor of Playbill.com. Her new column, “A Woman’s World” focuses on covering women’s issues, both on and Off-Broadway by highlighting successful women in the industry and the challenges they have faced. She can be followed on Twitter @PlaybillCarey and at her blog CareyPurcell.com. 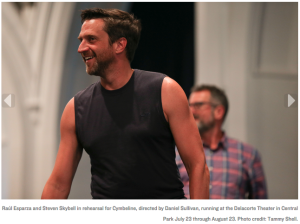 Being Alive from Company

King Of Sin from Leap of Faith