This Week on Broadway for March 8, 2015: Tom Kirdahy, Leslie Kritzer and Catherine Cox

James Marino chats with Broadway producer Tom Kirdahy. Peter Filichia and Michael Portantiere join in to talk with Leslie Kritzer and Catherine Cox about the release of the cast recording of The Memory Show. Michael gives us his review of Larry David’s new show Fish in the Dark. Peter reviews Women’s Project Theater’s production of Bright Half Life.

It’s Only a Play

Something Rotten! and The Visit Producers On Why They’re Teaming Up to Fight for Broadway Tax Benefits by Robert Simonson  (27 Feb 2015) 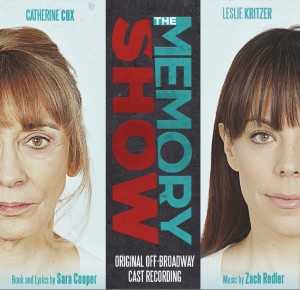 The Memory Show
Music by Zach Redler and book & lyrics by Sara Cooper with cast members Catherine Cox (Baby, Footloose) and Leslie Kritzer (A Catered Affair, Rooms).
Showing up is half the battle…and then there’s the other half. When a daughter comes home to care for her aging mother, memory is only one land mine in the contemporary new musical. Conflicting versions of the past collide in this honest and darkly funny portrait of a mother, a daughter, and their inescapable relationship.

Who’s The President Of The United States

You Remember Him Wrong

One Response to “This Week on Broadway for March 8, 2015: Tom Kirdahy, Leslie Kritzer and Catherine Cox”