This Week on Broadway for January 25, 2015: Gerrard Lobo and Morgan DeTogne

Peter Filichia, James Marino, and Michael Portantiere talk with Gerrard Lobo and Morgan DeTogne. Reviews include Honeymoon in Vegas, Peter’s take on Constellations and Nevermore as well as a report from the Junior Theater Festival in Atlanta, a Neverland update and Trivia Answers and a new Trivia Challenge! 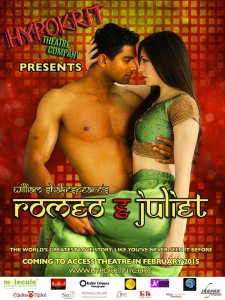 Hypokrit Theatre Company’s inaugural production is Romeo & Juliet, directed by Arpita Mukherjee, scheduled to open in the spring of 2015 (February) at the Access Theatre. This timeless classic will be brought to life with a Bollywood aesthetic.

Please be advised: There is NO late seating. Plan to arrive at least 30 minutes before showtime. Elevator service for the handicapped is available but only until the show begins.

Previous: This Week on Broadway for March 2, 2014: Rob McClure and Erin Mackey

When You Say Vegas