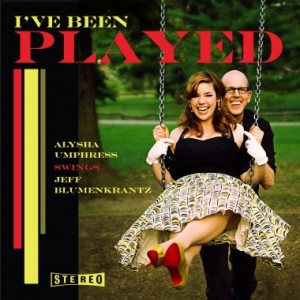 I’ve Been Played: Alysha Umphress Swings Jeff Blumenkrantz will be released on Yellow Sound Label in January 2015, featuring the vocals of Alysha Umphress, currently starring in the new Broadway revival of ON THE TOWN, and original jazz songs and arrangements by Tony Award-nominated composer and performer Jeff Blumenkrantz. Produced by Jeff Blumenkrantz and Michael Croiter, the album will be available via Amazon and iTunes beginning January 6, 2015. It is now available for pre-order at Amazon.com.

I’ve Been Played: Alysha Umphress Swings Jeff Blumenkrantz will feature Umphress singing original songs by Blumenkrantz, and several original arrangements created specifically for Umphress of the standards “Spring Is Here/Spring Can Really Hang You Up The Most”, “I Don’t Need Anything But You”, and “You Are Never Away/ Ten Minutes Ago”. The track listing is as follows:

Alysha Umphress currently stars on Broadway as “red-hot mama with bebop gusto” (Ben Brantley, The New York Times) ‘Hildy’ in the acclaimed revival of On the Town. Her other Broadway credits include American Idiot, On a Clear Day…, Priscilla Queen of the Desert, and Bring It On. She recently appeared as ‘Cee Cee Bloom in the world premiere of Beaches, the musical, at The Signature Theatre. Known in the Broadway community for her incredible vocals, this CD marks her debut solo studio recording.

Jeff Blumenkrantz received a Best Score Tony nomination for Urban Cowboy, the musical. His songs have been recorded by Audra McDonald, Sutton Foster, Rebecca Luker, Victoria Clark, Megan Mullally and more. As a performer, he most recently starred as “The Suspects” in the Off-Broadway hit musical, Murder for Two, for which he received a Lucille Lortel Award nomination for Outstanding Lead Actor in a Musical. His performing credits also include the Broadway productions of Into the Woods, Threepenny Opera, Damn Yankees, How to Succeed in Business…, and A Class Act, as well as the PBS-televised concerts of Candide and Sweeney Todd with The New York Philharmonic.

MP: In Fields Where They Lay

— LISTEN TO: Go See A Show Podcast: Brad Raimondo, director, and Spencer Davis Milford, actor, of “In Fields Where They Lay”

PF: Into The Woods (Movie)

1. Two Cents
3. I Don’t Need Anything But You
11. You Are Never Away/Ten Minutes Ago