Peter Filichia, James Marino and Michael Portantiere talk with Elena Shaddow. We also talk about King Lear @ The Delacorte Theater in Central Park and Sex With Strangers @ Second Stage. In the news, we discuss Larry David’s new play Fish in the Dark, Side Show makes it official, will James Corden forgo Broadway, Helen Mirren returns in The Audience, and Fun Home brings the fun back to Broadway. 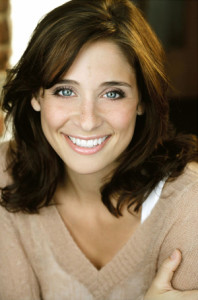 Elena Shaddow was most recently featured as Sister Sophia in NBC’s The Sound of Music Live! starring Carrie Underwood. She originated the role of Francesca Johnson to critical acclaim in the pre-Broadway production of The Bridges of Madison County at Williamstown Theater Festival, directed by Bartlett Sher and written by Jason Robert Brown and Marsha Norman. On Broadway she starred as Anne Dindon in the Tony Award-winning Broadway revival of La Cage Aux Folles at the Longacre Theater. Her past Broadway productions include The Woman in White (Trevor Nunn dir.), Fiddler on the Roof and Nine (both directed by David Leveaux), Sweet Smell of Success (Nicholas Hytner dir.), and Les Misérables. Off Broadway, Elena starred as Fanny in Fanny at City Center Encores! She was also a member of the Greek Chorus in The Bacchae directed by Joanne Akalitis at The Delacorte Theater as part of The Public Theater’s New York Shakespeare Festival. In London, Elena had the honor of playing Magnolia Hawkes in Show Boat at the Royal Albert Hall, the first musical of its size to be staged in said venue, opposite the wonderful John Owen Jones. (Francesca Zambello, dir). National Tours: Clara Johnson in the First National Tour of The Light in the Piazza (2007 Helen Hayes Best Actress Nomination)

ALWAYS BETTER: THE NEW GOLDEN AGE OF MUSICALS
Elena makes her 54 Below debut in an exciting evening dedicated to her favorite contemporary composers, ranging from Jason Robert Brown and Adam Guettel to Ahrens & Flaherty and Maury Yeston. Featuring special guests, this is one evening you won’t want to miss.

Side Show Broadway revival is now official: Oct. 28 at the St. James Theatre. It arrives via La Jolla Playhouse and the Kennedy Center

Fun Home takes Circle in the Square Theatre in April 2015

London Cast Recording of On The Town (via Masterworks Broadway)

Special thanks to Robbie Rozelle for his help.

Olivia from ILLYRIA by Pete Mills

Simple from NINE by Maury Yeston (Live at the Metropolitan Room)

One Response to “This Week on Broadway for August 10, 2014: Elena Shaddow”