This Week on Broadway for October 7, 2012: Aaron Lazar

Aaron has appeared in seven Broadway shows:
A Little Night Music
Impressionism
A Tale of Two Cities
Les Misérables
The Light in the Piazza
Oklahoma!
Mamma Mia!
The Phantom of the Opera

Some Enchanted Evening: The Music of Rodgers and Hammerstein

Aaron Lazar, Kelli O’Hara and Paulo Szot perform the timeless music of Richard Rodgers and Oscar Hammerstein II, the prolific duo who created Oklahoma!, Carousel, South Pacific, The King and I, The Sound of Music and other classic musicals from the golden age of Broadway.

The Approval Matrix: Week of October 8, 2012
Our deliberately oversimplified guide to who falls where on our taste hierarchies. 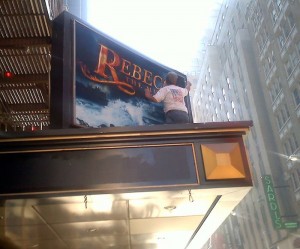 Commission Was Involved in $4.5 Million Financing for ‘Rebecca’ by William K. Rashbaum and Patrick Healy
It seems increasingly likely that a fund-raiser fabricated the four investors whom producers were relying on, according to a lawyer for the Broadway musical’s lead producer.
LINKED FROM THE NEW YORK TIMES SUBSCRIPTION

Hello, Gorgeous! by Michael Portantiere
As you may have heard, Barbra Streisand will soon return to the borough of her birth, Brooklyn, to give two concerts in the brand new Barclays Center. If you’re a big Barbra fan but you can’…
LINKED FROM BROADWAYSTARS

Should Ben Brantley Review Broadway Commercials? by James Sims
This is a commercial for the Broadway revival of “Annie”? Did I miss the shot of the title character, or perhaps the ragtag bunch of orphans doing a kick line?
LINKED FROM SIMSSCOOP.CO